What happens if I put Coca-Cola in my hair?

Coca-Cola makes hair look shinier as it is acidic (so closes the cuticle). Other ingredients like high fructose corn syrup would make the hair sticky and gritty. It won’t actually clean the hair or scalp, which would be a problem in the long term, especially for the scalp

How does Cola work for hair?

Coca Cola and other aerated drinks have phosphoric acid, which has a very low pH level, which tightens the cuticle and makes the hair strands smooth, shiny and gives a nice wavy look. In fact, rinsing it with cola and then washing it with water leaves hair more bouncy. Also, the presence of sugar adds more volume to the hair.Others say the sugar adds build-up to your hair, making it look fuller.

How to apply Coca-Cola to your hair?

Just pour and rinse cola over your hair and soak the strands nicely. Then keep it for 10-15 mins and wash it off.

Model and Insurgent actress Suki Waterhouse has really good hair. Like, the lightly tousled waves that hair dreams are made of. When asked how she gets those perfect waves, she told Us Weekly that she rinses her hair with Coca-Cola. “I don’t like my hair when it’s washed — it’s fine and limp — but Coca-Cola makes it tousled, like I’ve gone through the Amazon or something,” she said. Like, the sticky soda? On your hair? Really?

Instead of using  usual shampoo and conditioner,  the following females just rinsed their hair with Coca-Cola instead.

How To Wash Your Hair With Coca Cola

Hair Before: My hair is naturally wavy, and I’m always fighting against frizz. It’s fine but there’s a lot of it, so I’m always searching for that happy medium between voluminous and flat.

Hair After: While it was definitely softer (bonus!), one side of my hair had way too much texture — kind of like I jumped in the ocean and forgot to brush my hair afterwards. Maybe I poured too much Coke on that side? It was really shiny, which is a major plus, but I’m wondering if that was only because rinsing your hair with cold water helps it shine — and my soda was cold.

Final Thoughts: I think this would work better on someone with naturally straight, frizz-free hair, who isn’t fighting with their natural texture.

Hair Before: I have fine, curly, natural hair that is prone to breakage. It’s thin and needs product to give it a boost.

Hair After: My hair immediately felt thicker — like, so thick it was almost like I grew more hair! I usually finger comb my hair, but there was so much texture (kind of like when you go to the beach and have all that salt and sand in you’re hair), I had to use a wide tooth comb. My hair took about two hours to completely dry, which is about half the time it normally takes. I was worried my hair would be really dry without any product or leave-in conditioner in it, but it felt surprisingly soft. My hair felt a lot bigger than normal and really really poofy, but my curls were still mostly defined.

Final Thoughts: After I took the picture above, I decided to wet my hair to some leave-in conditioner in it. My hair turned to mush. It was a big poofy mess — no curls, just super frizzy. The Coca-Cola rinse might work for same-day styling, but my hair’s very fragile, and I need to be able to add product and re-style my hair. I would probably do it once a month, but not every day. 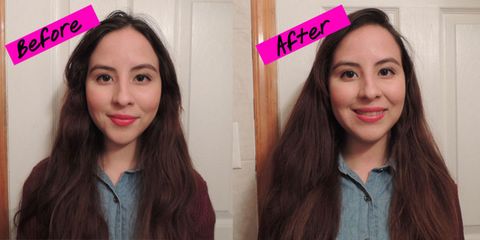 Hair Before: My long hair is really voluminous and wavy.

Hair After: When I first poured the Coke on my head in the shower, I expected it to make my hair feel sticky and stiff. While it didn’t feel as soft as it does when I use regular shampoo and conditioner in my hair, it felt pretty smooth afterward. After I blow-dried my hair, it actually had a bit more volume than usual, but it wasn’t over-the-top. The Coke also gave my hair some shine, which I loved. I was also worried it would make my hair smell weird, but it didn’t smell like anything.

Final Thoughts: Surprisingly, I liked the results for the most part — but not enough to do it often. It just didn’t make that big of a difference.

Hair Before: I have very fine hair. Normally after I shampoo and condition my hair, it ends up really frizzy unless I put a lot of product in it.

Hair After: My hair was noticeably less frizzy without adding any product. I also noticed it held a curl better on the second day.

Final Thoughts: Overall, the difference wasn’t enough to make it worth dealing with buying tons of soda and pouring it all over my hair (and washing my tub) all the time.

But is washing your hair using Coca-Cola really likely to have a good effect on your tresses? We asked the hair and scalp experts.

CONCLUSION-Washing Your Hair With Coca-Cola

Artificial additives, such as those found in soda drinks, have been linked to hair loss when consumed, although we are unaware of any research carried out into topical use. However, rinsing the hair with Coca-Cola is likely to strip the hair of essential oils, weakening it if used too often.

Apparently, Coca-Cola contains phosphoric acid, a very low pH. So when you apply it to your hair, the cuticle tightens, which makes your strands look smoother and your curls look more defined. Others say the sugar adds build-up to your hair, making it look fuller.